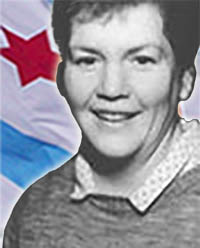 On May 19, 1988, at approximately 10:30 a.m., Officer Cardwell was driving northbound on the 1500 block of South Sacramento Avenue. She was going to pick up her assigned squad car at the Area 4 Motor Maintenance Garage when she lost control of the unmarked pool vehicle and veered into oncoming traffic and into two trees on the opposite side of the road. Witnesses said that they did not see Officer Cardwell take any evasive action when her car swerved and there were no skid marks present at the scene. She was removed from the car by firefighters at 10:45 a.m. and transported to Mount Sinai Hospital where she was pronounced dead at 10:45 a.m. Doctors believe she may have suffered a heart attack or a stroke.

Officer Cardwell was waked at Donnellan Funeral Home located at 10045 Skokie Boulevard, Skokie, Illinois, her funeral mass was held at Queen of the Universe Catholic Church located at 7114 South Hamlin Avenue and she was laid to rest on May 23, 1988 in St. Mary Catholic Cemetery and Mausoleum, 3801 West 87th Street, Evergreen Park, Illinois. Her grave is located in Grave 5, Lot 10, Block 13, Section X.

Patrolman Helen P. Cardwell (nee Casey), born January 28, 1938, received her Probationary Appointment to the Department on May 11, 1970. She earned 1 Honorable Mention and 127 Complimentary Letters during her career. She began her career in the Youth Division before being transferred to the Neighborhood Relations Division where she served as one of the original members of the Officer Friendly Program in 1972. Later she was assigned to the Preventative Programs Division. When the speakers unit of the Bureau of Community Services: Senior Citizens Services Division was established in 1982, she became a member. Several times each day, Officer Cardwell would meet with the elderly to teach them the simple but crucial rules of crime prevention. She held a Bachelors, Masters and was working towards a Doctorate Degree at the time of her death.

Officer Cardwell was a member of the Fraternal Order of Police. She was survived by her husband Lawrence Killian, Sr. (CPD), age 53; son, Lawrence Killian, Jr., age 9 and brother, Daniel Joseph, Jr. On September 19, 1988, her husband, Lawrence, passed away from a heart attack while on duty. 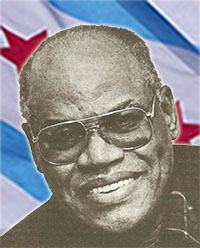 On September 30, 1987, at 11:40 a.m., Officer Jackson was working the third watch with his partner, Patrolman T. Eason on beat 1095. While on patrol the officers spotted a stolen 1974 Chevy speeding the wrong way on the 1900 block of South Hamlin Avenue, a one-way northbound street. The officers then began to follow the car into the North alley of Ogden Avenue and then turn North onto Avers Avenue. When the car turned onto Avers Avenue the driver, Robert Richardson, age 18, slammed on the brakes at 1950 South Avers Avenue jumped out of the car and fled on foot. He ran Eastbound through an alley, the officers giving chase on foot never loosing sight of Richardson. The chase last for approximately two and a half blocks where they were joined by beat 1022, Patrolman M. Salcedo and Louis Soto and beat 4473, Patrolman M. Acevedo and A. Badie. Richardson was apprehended by Officers Badie, Eason, Jackson, Salcedo and Soto at 1920 South Avers Avenue.

Following the apprehension, beat 1022 drove Officer Eason back to the stolen car. Officer Jackson drove Officer Badie back to his squad car and partner who was with another suspect regarding a separate matter. Minutes later at 11:56 a.m. Officer Jackson was observed turning into and alley by two civilians, J.C. Halums, Jr., age 43, of 1834 South Avers Avenue and Ernest J. Hollins, age 47, of 1948 South Hamlin Avenue, and strike a garbage can, the car coming to a stop at 3720 West Ogden Avenue. The civilians walked over to see what was going on and observed Officer Jackson slumped over the steering wheel. They flagged down beat 1062, Patrolmen Daukus and McMeel, who was driving by and notified them of Officer Jackson’s situation. Beat 1062 investigated and called for an ambulance. Paramedics arrived and attempted to revive him on scene but were unsuccessful. Officer Jackson was transported to Mount Sinai Hospital by CFD Ambulance #34 where he was pronounced dead by Dr. Glimp at 12:55 p.m. on September 30, 1987. Officer Jackson’s death was caused from cardiac arrest.

Officer Jackson opted to remain on the force after the mandatory retirement age of 63, was raised by the City Council to 70. Officer Jackson was planning to retire within 6 months and move to Mexico at the time of his death.

Officer Jackson served in the U.S. Navy for 3 years, was a veteran of World War II and was Honorably Discharged. He was also a member of the Fraternal Order of Police. Officer Jackson was survived by his children: Artis, Brian (USMC) and Gayle and siblings: Ansonia and Isabella Beatrice. He was preceded in death by his son, Philip and parents: Clora (nee Winston and Felix C. His fourth son, Philip, died in combat during the Vietnam War. 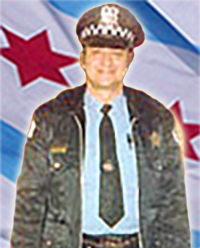 On July 27, 1986, at 3:00 a.m., Officer Bryja was off duty at home, 6612 South Artesian Avenue, when he was awakened by the sound of his wife’s car alarm. His wife set the alarm off to summon Officer Bryja when she drove up to the house. Mrs. Brunkella observed two men trying to set a neighbor’s garage on fire after spray-painting it with graffiti. Officer Bryja and his 18-year-old son chased the vandals through an alley for four blocks before losing them. When he returned home, he began complaining of chest pains, started to sweat profusely, vomited and then collapsed. At 4:30 a.m., Officer Bryja was transported to Holy Cross Hospital by CFD Ambulance #18 where he was pronounced dead by Dr. A. Shah at 4:51 a.m. on July 27, 1986.

On July 29, 1986, Area 3 detectives located and arrested two juveniles, ages 15 and 16, who were charged with Criminal Damage to Property. The two youths gave a full confession and also claimed there was a thrid boy, age 12, with them at the time of the incident whom was their lookout. On July 31, 1986, the third juvenile, age 13, was identified and arrested. He was also charged with Criminal Damage to Property. Felony charges were denied on all three juveniles by A.S.A. Sublett. All three boys were taken to the Audy home to await their appearance in Juvenile Court on April 30, 1987.

Patrolman George T. Bryja, born March 1, 1941, received his Probationary Appointment to the Department on June 13, 1966. He earned 1 Department Commendation and various other awards during his career.

Officer Bryja served in the U.S. Marine Corps from 1959 to 1963 and was Honorably Discharged. He was also a member of the Fraternal Order of Police. Officer Bryja was survived by his wife, Sharon A. (nee Carlson); children: John, age 18 and Peggy A., age 14 and siblings: Anna Mary and Stephanie. His son would later become a Chicago Police Officer. He was preceded in death by his parents: John and Mary (nee Borkowski). 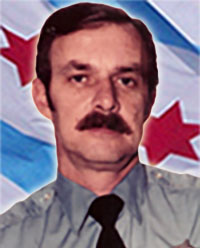 On August 16, 1982, at 7:00 a.m., Officer Lynch and his partner, Patrolman Raymond T. Zene, were working the second watch on beat 773. The officers, assigned to the squadrol, were assigned to transport a deceased body. The officers responded to 1140 West Marquette Road to transport Ms. Willie Davis, age 82, whom had passed away. Upon arrival, they loaded Ms. Davis onto a portable stretcher and carried the body to the squadrol. While removing the body Officer Lynch began to experience severe chest pains. After loading the body, they transported Ms. Davis to St. Bernard Hospital where she was pronounced dead by Dr. Arnold at 8:30 a.m. on August 16, 1982. While in the hospital’s emergency room, Officer Lynch became pale and began to perspire profusely. Officer Zene immediately called for assistance and he was diagnosed as suffering a massive heart attack. Officer Lynch’s heart and lungs had stopped functioning and through the extraordinary efforts of Nurse Ora Wright Officer Lynch’s life was prolonged. Officer Lynch was admitted and confined to the intensive care unit where he died three days later. He was pronounced dead at 10:40 a.m. on August 19, 1982.

Officer John Lynch was a member of the Fraternal Order of Police. He was survived by his wife, JoAnn M. (nee McLaughlin), age 45; children: James Joseph, age 14, Joan Gunn and Michael; mother, Johanna (nee Greaney) and siblings: Edward and Peggie Tunney (CFD). He was preceded in death by his father, Luke. 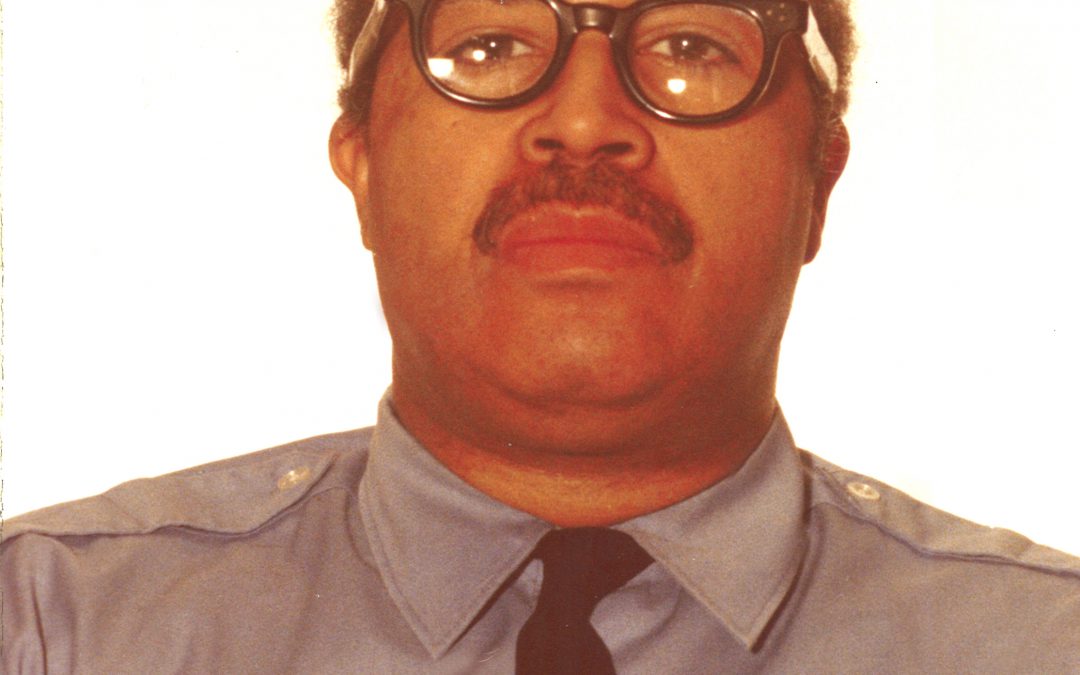 On January 6, 1982, at 6:15 p.m., a student of the Hyde Park Career Academy located at 6220 South Stony Island Avenue was robbed by Joel Ford, age 15, of 7016 South Harper Avenue, also a student. Ford approached the victim inside the school and produced a gun and then took the victims gym bag. He then struck the victim in the head with a fist while holding the gun in his other hand and fled the scene.

On January 7, 1982, in the early morning, the victim and his father appeared in Officer Clay’s office. Officer Clay was the assigned school officer and on duty at the time. The victim, along with his father, reported the robbery to Officer Clay who filed a police report. Later the same day, at 12:15 p.m., the victim told Officer Clay that he had seen Ford in the school hallway. Officer Clay imediately went into the hallway to look for the suspect. He observed Ford in the hallway, stoped him, and told him to turn around. While attempting to search Ford, he resisted and a struggle ensued. During the struggle the youth caused Officer Clay to fall to the floor, striking his right knee, breaking his kneecap. Officer Clay then became partially incapacitated due to the injury. Several other school personnel heard the commotion and stepped in to assist the officer. They held the offender until police arrived to take him into custody. A custodial search of the offender revealed a loaded .22 caliber revolver with six rounds in his backpack. The juvenile was transported to the 3rd District for processing. Officer Clay was transported to Billings Hospital where he was treated, released and placed on the Medical Roll.

While on the medical Officer Clay developed a blood clot from the knee injury. On January 25, 1982, 1:15 p.m., he was found by his mother-in-law, Ms. Molly Hale, laying on his bedroom floor unresponsive. She called for help and CFD responded. Officer Clay was transported to Jackson Park Hospital by CFD Ambulance #38 where he was pronounced dead by Dr. Correa at 2:43 p.m. on January 25, 1982. On January 26, 1982, it was determind by a Cook County Medical Examiner Pathologist that Officer Clay died as the result of a bi-lateral pulmonary embolism in association with a recent leg injury.

Ford was charged as an adult with armed robbery, armed violence, unlawful use of weapon, resisting arrest and aggravated battery. ASA Kevin Horan after reviewing all reports and interviewing witness attempt to receive approval for felony charges on Ford. After consulting with Supervising ASA Joseph LoCallo felony charges were denied.

Officer Clay served in the Armed Forces, was a veteran of the Korean War and was Honorably Discharged. He was a member of the Fraternal Order of Police. Officer Clay was survived by his wife, Kay Frances (nee Hale); children: Angela Kay, age 22, Edgar Allen, III, age 21 and Robert Nathanial, age 31; brother, Sidney L. and five grandchildren. He was preceded in death by his parents: Edgar Allen, Sr. and Ella Louise (nee Long).