August 2022 Officers of the Month

Congratulations to our AUGUST 2022 Officers of the Month:
DETAILS INCIDENT NO. 1 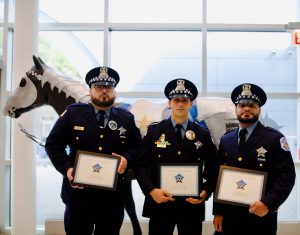 Awardees:
Police Officer Joseph Pentimone
Police Officer Carlos Mota
Police Officer Jesus Longoria
Police Officer Michael Donnelly
Police Officer Richard Rodriguez
On June 27th, 2022, a woman got out of her Audi Q5 in the 2300 block of North Clark, placed her car keys in her rear pocket and entered a store. Three subjects followed her inside, and one of them approached the woman. The woman felt someone reach into her pocket and turned to see a subject trying to get her car keys out of her pocket. A struggle ensued in which the victim was shoved to the ground and her car keys taken. The three offenders fled out of the store and got into the victim’s car. The victim followed them and attempted to stop them and pulled on the door handle, but the offenders fled and made good their escape in the victim’s car. The police were called, and a flash message was sent with a description of the offenders and the vehicle announced. Our awardees were monitoring the radio, heard the description and immediately began doing a grid search for the suspect vehicle. Their efforts paid off a short time later when they saw the wanted vehicle traveling southbound on Lake Shore Drive as they were traveling northbound on Lake Shore Drive. They made a U-turn and the driver of the Audi then traveled westbound into traffic at Chicago and Lake Shore Drive and struck a vehicle in traffic. The three offenders then fled on foot in different directions with our awardees in pursuit. Our awardees and other assist units were able to successfully apprehend all three offenders. The three were positively identified on the scene by the victim as the offenders in this robbery and vehicle theft. All three offenders were charged with robbery and possession of a stolen vehicle and are awaiting trial. Thanks to our awardees’ quick actions, three dangerous felons were apprehended shortly after committing a robbery and vehicle theft. It is an honor to name them our August Officers of the Month.
DETAILS INCIDENT NO. 2: 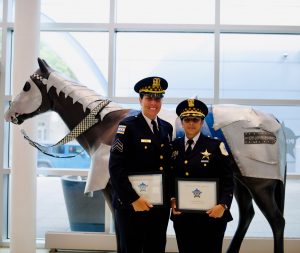 On May 30th, 2022, at approximately 1:00 p.m. while driving into work on the Kennedy expressway, Sgt Erin Lauesen and Commander Melinda Linas came upon a car stopped in the left lane. As they neared, they noticed a concerned citizen trying to flag down passing cars. They pulled over their vehicle and the person who was flagging down cars indicated to our awardees that a passenger in their vehicle was experiencing a medical emergency.  Commander Linas immediately began to tend to the man in the passenger seat. This subject was found to be unresponsive and did not have a pulse. Commander Linas began chest compressions as Sgt. Lauesen notified the dispatcher as to their location and an immediate need for an ambulance. After notifying dispatch, Sergeant Lauesen took over performing chest compressions while Commander Linas removed three young, terrified children from the backseat of the car and relocated them safely to her squad car. Due to our awardees’ efforts, the nonresponsive subject began to take labored breaths and was kept conscious until the ambulance arrived, whose crew was able to stabilize and transport him to the hospital where he was alert, responsive, and later discharged. Thanks to our awardees’ swift and decisive actions, an unresponsive person with no pulse was resuscitated, and transported to the hospital where he made a full recovery. It is an honor to name these Chicago Police Department supervisors our Officers of the Month.