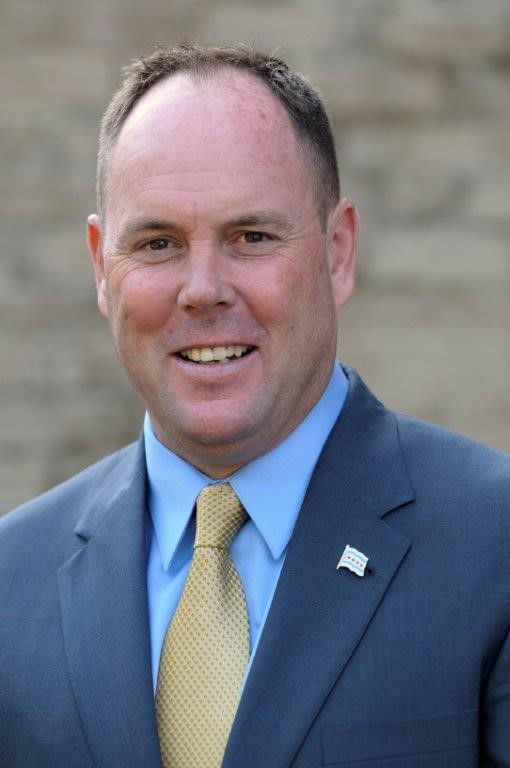 Matthew J. O’Shea serves as Alderman of the 19th Ward, representing the communities of Beverly, Morgan Park, and Mount Greenwood.  Matt is a lifelong resident of the Beverly Community, and he serves it tirelessly.  In the City Council he chairs the committee on Aviation and serves on the committees on Budget & Government Operations, Education & Child Development, Economic, Capital, and Technological Development, Finance, Human Relations & Health, and Committees & Rules.  As Alderman of the 19th Ward, O’Shea has worked to improve local schools, stimulate economic development, and enhance public safety.

Finally, and certainly not least of all, Matt serves on the Advisory Board of the Chicago Police Memorial Foundation, and we are extremely fortunate to have him.  Matt has long been a vocal supporter of the police in his community and indeed the entire Chicago area.  Several Gold Star Families live in the 19th Ward and Matt has long been a part of Operation Santa, delivering support and assistance to those families during the holiday season and, more importantly, the reminder that their community remembers them.  Motivated by his concern for the men and women of the Chicago Police Department, Matt leapt into action and started an Annual Pancake Breakfast in the community held in support of Get Behind the Vest, the Foundation’s initiative to provide replacement bulletproof vests to Chicago Police officers.  Teaming up with area parishes and Julie Harrigan of the Original Pancake House, Matt has raised over $250,000 for the program.  And, just this past month, Matt partnered up with WGN Radio to host a Vest-A-Thon, a three-hour call-in telethon to raise additional funds to purchase vests for our officers.  The Vest-A-Thon raised over $210,000!  Through Matt’s tireless efforts and widespread reach, he rallies community support for our officers, and to date he has raised an astonishing $460,000 for the Get Behind the Vest Program.  To put that into perspective, Matt has protected the lives of 920 Chicago Police officers who risk so much protecting us by providing each of them with a replacement bulletproof vest.

Matt, we are humbled by your spirited support of the Chicago Police Memorial Foundation, and our Mission to provide support and financial assistance to Chicago Police families in need.  You are a living and working example of our motto, “Never Forget” and for that we, and the families we serve, are profoundly grateful.