December 2022 Officers of the Month

Congratulations to our December 2022 Officers of the Month: 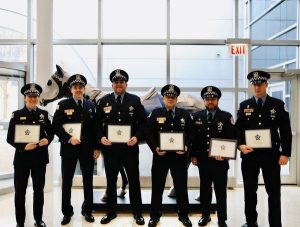 This month’s award recipients include a team of officers who successfully investigated an attempted carjacking and attempted murder of a retired Chicago police officer and two officers who administered life-saving aid to a 16-year old shooting victim.

The Chicago Police Memorial Foundation takes time every month to recognize the heroic acts of our police officers because so much good police work happens that just flies beneath the radar.

On August 22 of this year, a retired Chicago Police Officer was approached while getting into his vehicle in the 3800 block of West Grenshaw by an offender who was armed with a firearm and demanded money and the retired officer’s vehicle.

The officers then began checking local hospitals to see if a juvenile male had sought medical assistance for his bullet wound.

The officers eventually located a juvenile subject with a gunshot wound to the leg at Loyola University Hospital and Medical Center in Maywood.

Det. Bahena, utilizing a physical description of the suspect and POD video footage of the incident, quickly determined that the subject at Loyola Hospital was the likely offender from this armed robbery and shooting and he was placed into custody.

An investigation was begun that involved Area 4 Detectives Alex Kulisek and Guy Daily. At the conclusion of their probe, the juvenile offender was eventually charged as an adult with Attempt Murder, Attempt Aggravated Vehicular Hijacking with a Firearm, Aggravated Battery with a Firearm and Aggravated Discharge of a Firearm. His is presently in custody awaiting trial.

Due to the quick actions and investigative skills displayed by every officer involved, a dangerous, armed offender, who had attempted to kill a retired police officer was quickly identified and placed into custody.

We are proud to name the following as Officers of the Month: 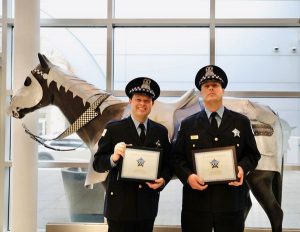 On September 3, 2022, at 8:10pm, in the 3500 block of West Wilson, the Dow family was driving home from a dinner with relatives when gunfire erupted.

Bullets came through their car window and one of the bullets struck their 16-year-old son in the ear and lodged in the back of his neck. The bullet missed striking his spinal cord by less than one centimeter.

The Dow family was able to flag down our awardees, 17th District Officers Michael Pinzine and Taras Andrushko, very shortly after the shooting, the officers immediately began treating the victim and requested an ambulance.In an email written to the officers’ commander, Michelene Alexa, the victim’s family wrote:

“We couldn’t have been more fortunate to have hailed down Officers Pinzine and Andrushko who were passing by, within 60 to 90 seconds of the incident. They rushed to our car and immediately applied pressure to the wound which was bleeding profusely.

Additionally, while attending to our son, they called an ambulance which arrived within minutes of their response.

There is no doubt in our minds that their immediate response and skill in applying pressure to the wound, prevented him from losing too much blood and saved our son’s life.”

Thanks to our awardees’ swift and decisive actions, and relying upon their training, they were able to provide emergency first aid to a critically wounded 16-year-old until an ambulance arrived to transport the victim to Illinois Masonic Hospital for emergency treatment.

It is our honor to award Police Officers Michael Pinzine and Taras Andrushko of our Officers of the Month.