March 2022 Officers of the Month 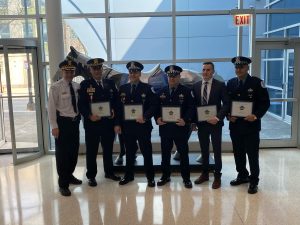 Congratulations to the March Chicago Police Memorial Foundation’s Officers of the Month: Sergeant Mathew Lopez, Police Officer Brayan Jauregui, Police Officer Nicolas Morales, Police Officer Daniel McAuliffe, and Police Officer Roger Ferreira. It is our honor and a privilege to serve you and your families.
On August 7, 2021, at 9:09 p.m., our awardees responded to an emergency distress call of “Shots fired by the police,” which was broadcast over Zone 6 radio, with the location being in the vicinity of 63rd and South Bell Avenue. These officers responded immediately to the scene. Upon their arrival, Officers Morales and Jauregui immediately exited their unmarked squad car and observed that both Officers Ella French and Carlos Yanez, Jr. had been shot and were lying on the pavement. Officer Morales, with assistance from other responding officers, placed critically wounded Officer Yanez, Jr. in his unmarked squad car and immediately left the scene to ensure that he received the emergency trauma care of which he was in dire need at the University of Chicago Hospital.
Sergeant Lopez then observed a subject crawling on the ground at 6318 S. Bell Ave. Sergeant Lopez immediately determined that this was the offender that was wanted in connection with the shooting of Officers French and Yanez. Sergeant Lopez placed the offender into custody and summoned EMS for the wounded suspect. McAuliffe, Ferreira, and Jauregui heard a disturbance in the yard at 6320 S. BELL Ave. These officers entered the yard and observed a second offender being subdued by civilians, with these officers immediately placing this offender into custody.
At this juncture, Officer McAuliffe observed a firearm in the yard and protected that crime scene until forensic personnel would be able to recover the weapon. Officer Jauregui, after ensuring Officer McAuliffe was in control of the second offender, then assisted Sergeant Lopez as a CFD ambulance crew were taking the first offender to the hospital. Officer Ferreira rode with this offender to Christ Hospital and remained with him until he was relieved.
These officers each performed a separate act, and each of these officers played an integral part in this chaotic and horrific event, saving the life of a wounded officer and transporting him to a trauma center, placing the offenders into custody, and securing and maintaining chain of custody and evidence to help in the charging and future prosecution of these violent offenders. Further, these listed officers assisted the surviving family members of fallen police officer Ella French with a small sense of closure, in that her cold-blooded killers were removed from the streets of Chicago.