February 2022 Officers of the Month 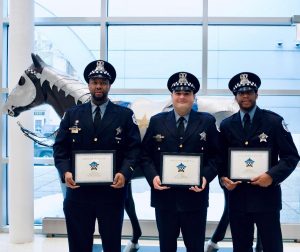 The Chicago Police Memorial Foundation along with our sponsor, Police Mortgage, LLC, proudly presented 3 Chicago Police Officers: Anthony Hobbs, Gary Claxton, and Ruben Cardoza of the 022nd District with the February Officer of the Month Award. On November 21, 2021, at 10pm, these awardees responded to a “men with guns” call. The officers observed the vehicle and suspects, who began to flee. As they were fleeing, two of the suspects began shooting at the officers. Our awardees continued to chase the offenders and radioed for assistance. One adult was arrested and .40 caliber semi-automatic pistol was recovered near the scene. After a search by our awardees, a second suspect was taken into custody. Underneath the stairs where this offender was arrested, a .40 caliber semi-automatic pistol was recovered. A search of the area revealed sixteen spent .40 caliber spent shell casings on the ground. At the conclusion of this investigation, each offender was charged with multiple felonies by the Cook County State’s Attorney’s Office: 3 counts of Attempted Murder. 3 counts of Aggravated Discharge of a Firearm, and Aggravated Unlawful Use of a Weapon. Despite being shot at 16 times our awardees were able to take into custody two dangerous armed offenders without firing a single shot themselves. Congratulations on a job well done!